And wouldn't such a base layer protocol be convenient for social media? That is what Nostr is trying to achieve. It's an open protocol that anyone can use and build on. As it connects people on the base layer of the protocol, once you connect with someone, you relate to them regardless of the social platform (client) built on Nostr you use. You don't have to re-establish connections if you switch platforms. Again, Nostr exists on the deep layer of the protocol, not on the application layer.

Even though Nostr (Notes and Other Stuff Transmitted by Relays) shares some design characteristics with Bitcoin, it is a distinct protocol. It was first proposed by a developer who worked on Bitcoin. This developer, called Fiatjaf, wanted to build a protocol that is as close as possible to a censorship resistant Twitter. A protocol for a global social network that can't be censored.

To achieve this, Nostr doesn't rely on any central server, but instead on different relays, which makes it resilient. It is based on cryptographic keys and signatures, so it is tamperproof. If you generate an account, you get a private key, which will safeguard access to your account.

How to make a Nostr account - no e-mail address needed 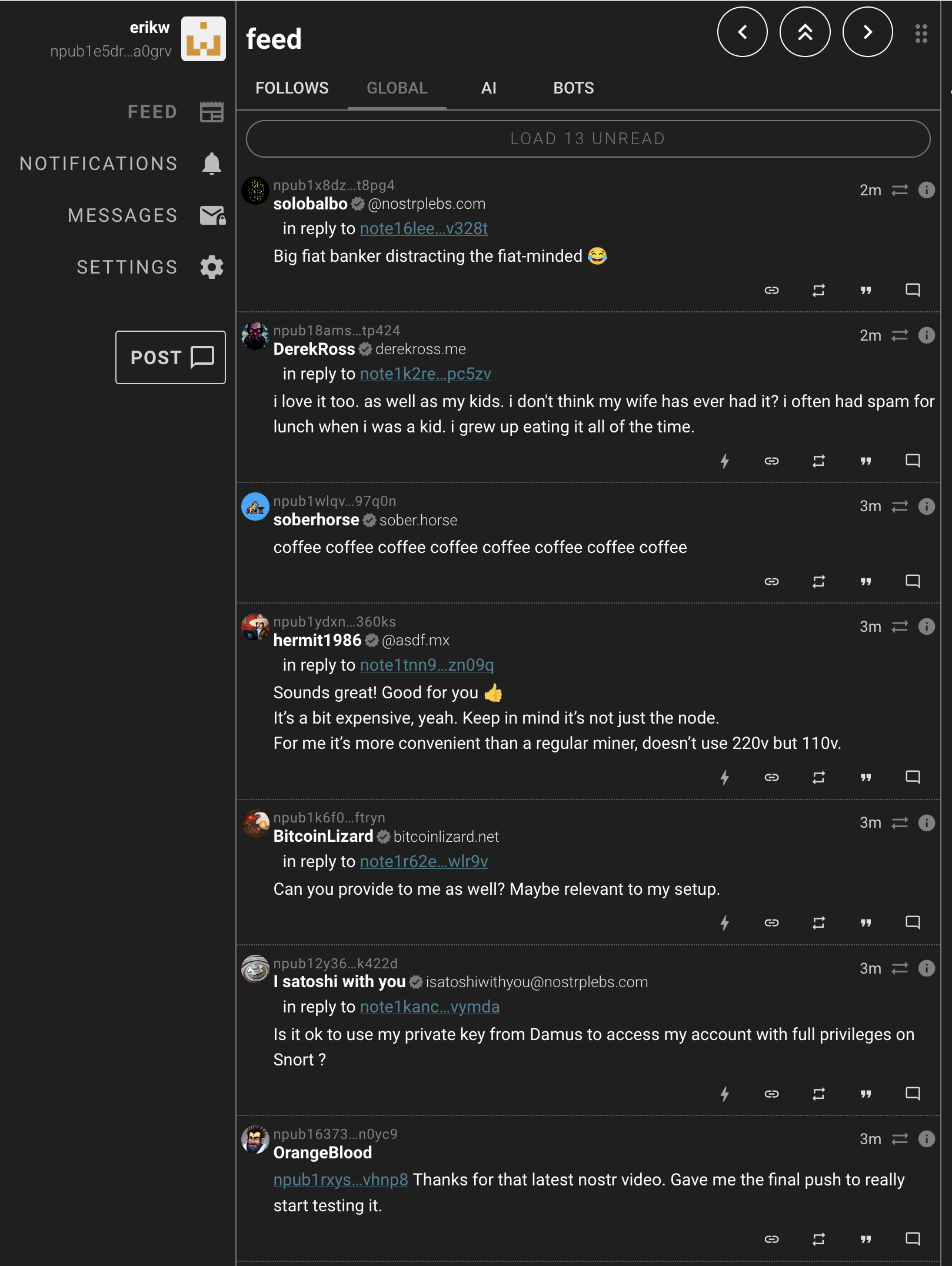 Example of the feed of a platform running on Nostr: Astral Ninja

It's a bit more tricky than setting up a Twitter account, but for Bitcoiners this shouldn't pose a problem. Here is a good explanation video by BTC Sessions, who adds steps to integrate a Lightning wallet to the above steps.

Nostr under the hood: the three critical components

As a crypto enthusiast, you will enjoy some benefits using this system. For example, your public key functions as your username.

How does Nostr compare to Mastodon?

A few months before Nostr started gaining traction, a Twitter alternative called Mastodon generated attention. For users who care about a permissionless, censorship resistant system, there are some issues with Mastodon:

On Mastodon, your identity/username is controlled by who is running the server. The fact that Mastodon has more than one servers doesn't fundamentally make it different from Twitter. Why? Because these servers tend to act like dictatorships and boot people out. Subsequent migration between servers is tough and depends totally on the cooperation by the servers. Bottomline is you just don't own your account.

Although it is a fundamental innovation, it remains to be seen whether Nostr will become a protocol that manages to attract many developers and users. Overthrowing existing monopolies is never easy. But the fact that it is open source should not be underestimated. The future should show whether it becomes a kind of Linux among social media, or even more dominant. In any case, the network already has the support of a growing group of Bitcoiners, of which there are a few hundred million worldwide.

Since the birth of Bitcoin people have been worried about improving decryption technology one day becoming capable of breaking the encryption. A recent paper by Chinese researchers claiming a quantum computation breakthrough - which most consider a hoax - adds fuel to the fire. How likely a candidate is quantum computing to ever break Bitcoin's encryption?

What is a Merkle Tree and how is Bitcoin growing them?

Hash trees are vital to blockchain technology and Bitcoin because they allow validating data securely and efficiently. The name Merkle tree derives from its scientist inventor Ralph Merkle who patented his invention in 1979. Today, hash trees are very common in cryptography as well as in computer science.