What is the Wyckoff market cycle?

The Wyckoff market cycle was developed by Richard Wyckoff in the early 1930s. Being developed for the stock market, it is now applied to all sorts of financial markets, including crypto markets.

A law that Wyckoff is perhaps most known for, is the law of cause and effect. This states that the differences between supply and demand come after periods of preparation, because of specific events. For example:

Wyckoff used a charting technique to estimate the price targets based on the periods of accumulation and distribution.

Wyckoff observed that he prices of securities move in a cyclical pattern of four distinct phases: accumulation, markup, distribution, and markdown.

1 Accumulation phase
This is the first phase of a new market cycle. This phase is usually marked by a sideways movement. The accumulation is a gradual process, which is why the price doesn't change significantly. 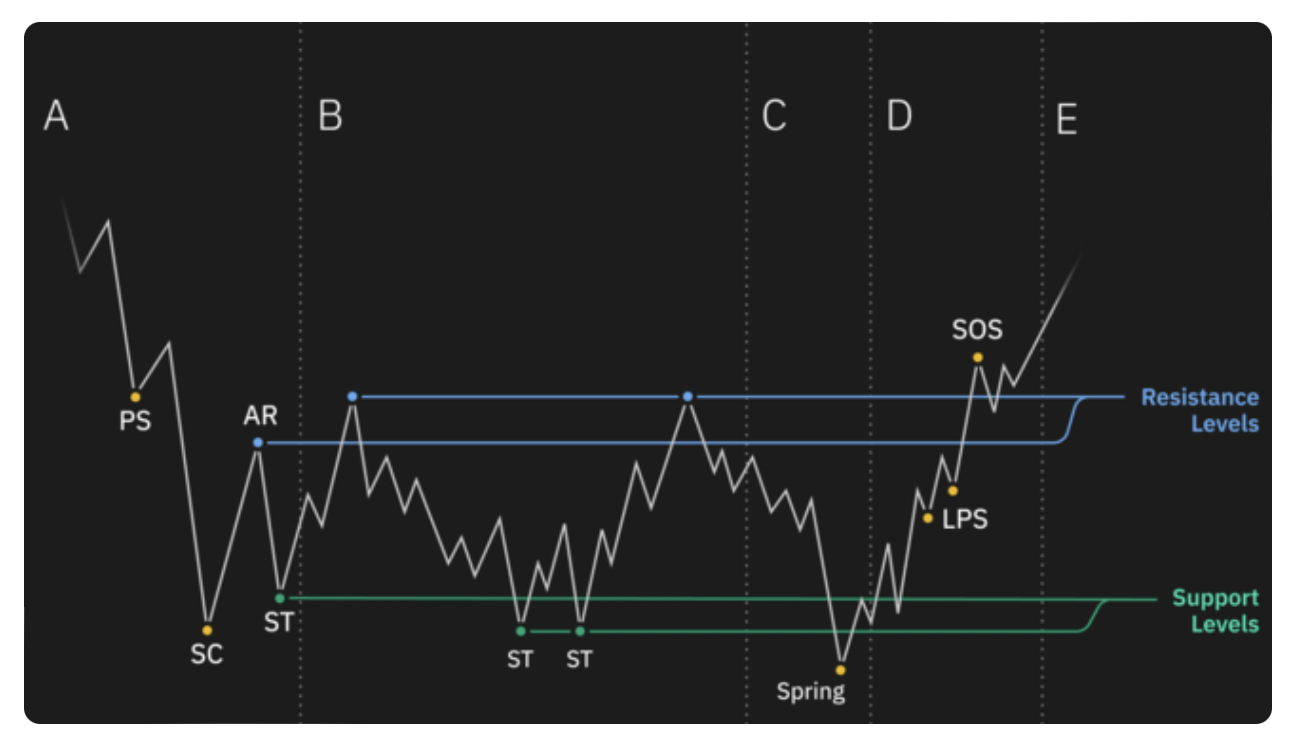 The anatomy of the accumulation phase

The accumulation phase can be broken down in smaller sections.

After a stage of accumulation, the sellers get 'exhausted' and the price climbs above the range that defined the accumulation phase. These first signs of an uptrend attract more investors, reinforcing the increasing demand and uptrend. As the market moves up, other investors are encouraged to buy. Eventually, even the general public becomes excited enough to get involved. By the way, within an uptrend, there can be short phases of accumulation. These are sometimes called re-accumulation phases, that precede the continuation of the upward movement.

At a certain point, the uptrend will fail to generate new highs. This signals the start of the distribution phase. It's kind of a mirror image of the accumulation phase: the price is in a range. At this stage, 'smart money' is taking profits, 'distributing' their stocks or coins to less experienced investors. 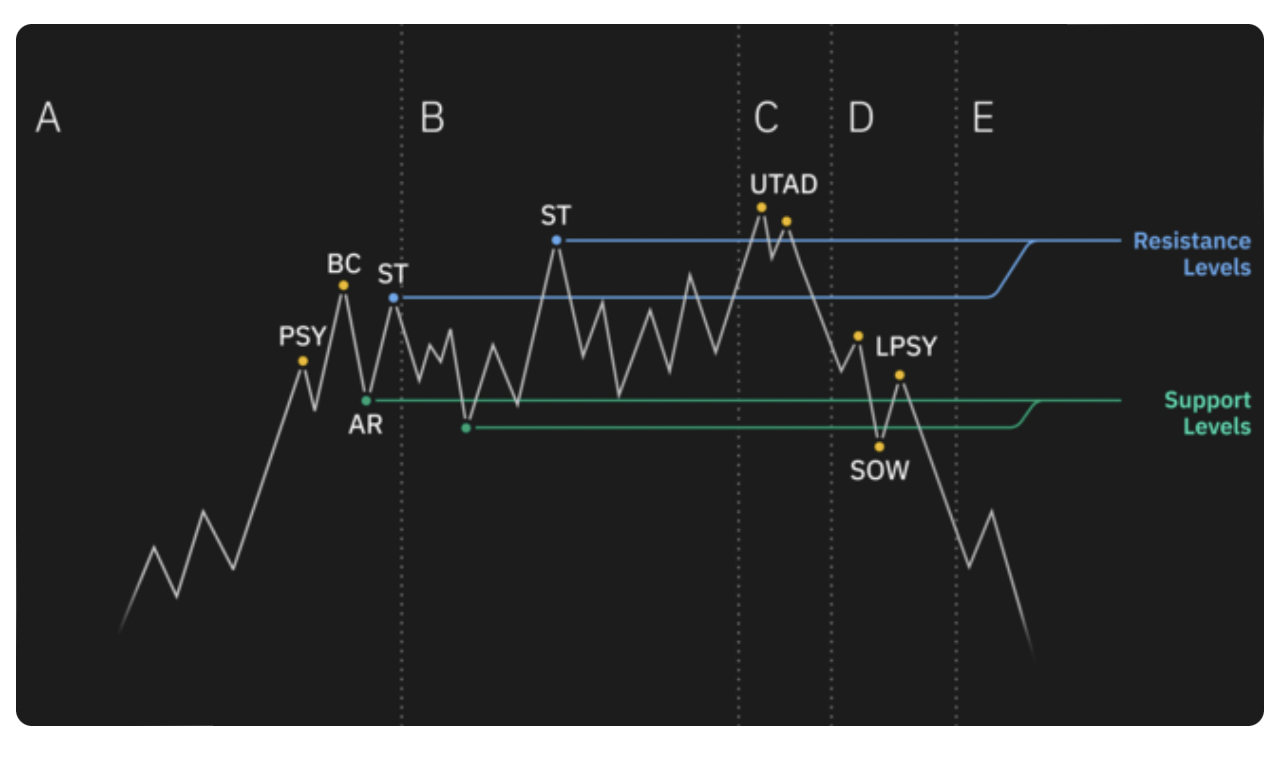 The anatomy of the distribution phase

After the distribution phase, the market starts going down. Smart money is done selling a good amount of their shares. Eventually, the supply becomes greater than demand, and the downtrend is in full force. Just like during the uptrend, the downtrend may have re-distribution phases. These are basically short-term consolidation between big price drops - also called bear market rallies.

Wyckoff noted and warned that the market never behaves in exactly the same way twice.

Trends will unfold in roughly similar price patterns, with endless variations in detail. The patterns are 'shapeshifting' just enough from earlier patterns to surprise and confuse market participants. For example, the accumulation can happen with a very long phase B, or without a spring.

Conclusion: be the smart money

Wyckoff had a term for what we these days call smart money. That is, experienced and disciplined investors. He adviced traders to be what he called 'the composite man': the smart money that buys during accumulation phases and sells in distribution phases. This sounds easier than it is. Emotion takes after a period of an uptrend. It's hard to tell a distribution phase from a re-accumulation phase, for example.

Stop Loss vs. Stop Limit – How to use both order types

Order types are basic tools for traders. They allow to add conditions to each order that determine under which circumstances they are executed. This opens up a door to more trading opportunities since conditional orders execute upon events that can change the direction of a trade or even the whole market.

What are order books and how do you read them?

On the LiteBit Exchange platform, order books are available. In this article, we are going to explore what an order book is and how you can use them for your trading.

What is a death cross in crypto?

Some terms commonly used in crypto need explanation, and it is obvious why. DYOR, FUD, WGMI, and many more terms and abbreviations are circulating in this space. Each one has a meaning and while some of them are trivial others are in fact important to understand when navigating the crypto space.

What are trading bots in crypto?