What is the hashrate and why does it matter?

If Bitcoin is a walled city, then the height of the hashrate equals the height of the walls. To be more concrete, the Bitcoin network is a database as for which the right to add data is reserved only for parties who are willing to put up enough computing power. The accumulated computing power that these miners worldwide deploy at any given time is called the hashrate.

A high hashrate means more power deployed and thus a more secure network. This is because the higher the hashrate, the higher the cost to have a chance at mining a block. as a malicious party with the intention of sabotageing the network, you would need to be able to mobilize more than 50% of the hashrate for an extended period of time. With the current hashrate, that is a logistical endeavour that would take months or years and more than $10 billion.

'Hashing' is basically repeatedly trying to guess a huge random number. The miner who first guesses it correctly gets the honor of adding a block of transactions and, even more interesting, the block reward: currently 6.25 Bitcoin, or at the current price about $300,000.

Bitcoin issuance should not be too fast (or too slow), but should occur in 10-minute blocks. To keep it that way, the network difficulty is recalibrated every two weeks - every 2,016 blocks, to be exact. This is called the difficulty adjustment. Depending on the development of the hashrate, it is made easier or harder to guess the target hash. This keeps the average time it takes to mine a block constant over the long haul.

Bitcoin and other crypto currencies of the early years are all based on this principle of hashpower or in other words, proof-of-work. You might think: why make it so hard and have miners waste all that energy? The origins of proof-of-work sheds light on this. In the 1990s, proof-of-work was proposed as a solution against denial-of-service attacks and spam email. If sending an email is no longer free but costs a small amount of processor time and thus money, it becomes unprofitable for senders of millions of spam emails to continue their practices. In short, proof-of-work stimulates the honest use of a communication network, without the need for an arbiter.

Incidentally, proof-of-work was never used for email networks. In the case of Gmail, Google is the central authority that determines whether your mail is spam or not. Bitcoin explicitly does not work that way: it is decentralized. We do not want a central bank to determine which transactions are valid and which are not. But to do that, the miners have to hash it out like crazy!

The correlation with the price

The hashrate is a measure of the security of the network and the miners' belief in healthy price development. It is one of the most important indicators on the dashboard of the Bitcoin network. 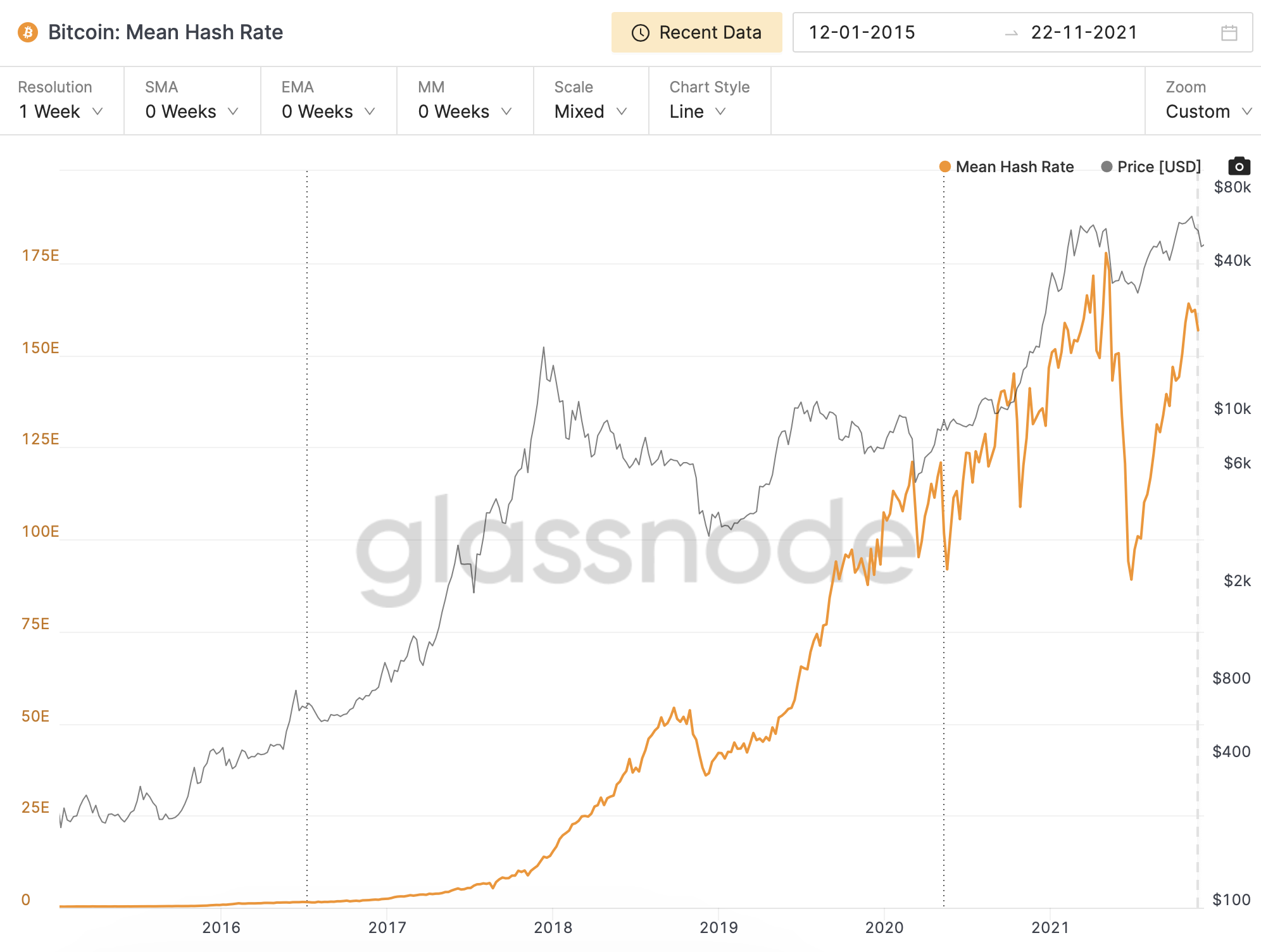 When the Bitcoin price is high, miners can make good money from their block rewards, even after deducting the cost of their equipment and electricity bill. A high price is an incentive for more miners to join. Thus, the Bitcoin price never remains out of balance for long with the collective costs miners incur. Still, this can happen temporarily. For example, in May 2021, when China imposed a ban on mining, local miners - at that time responsible for roughly half of the world's total hashrate - packed their bags. The hashrate dropped from 170 exahash per second to under 90 exahash per second (exa is a 1 with eighteen zeros or a billion times a billion). It took only six months for the hashrate to return roughly to its former level. The United States in particular welcomed the orphaned miners with open arms. The Bitcoin network had once again shown its resilience.

A mining rig is the assembled hardware you need to mine crypto. Bitcoin is the best-known example of a coin that comes into circulation through mining. Doge and Litecoin are also well-known coins in this list.

Maximal Extractable Value (MEV) is the (potential) profits for miners or validators producing blocks on a blockchain. They do this by picking and re-ordering transactions within blocks. You can view MEV as a tax on users of the blockchain.

Fat protocol or fat apps - where will the money flow?

Is most of the value in the crypto world going to be in the base layer? In other words, the blockchains like Ethereum and Bitcoin? Or will the applications built on them be the winners? Think Uniswap or Aave. This is the main question many followers of crypto are asking.