What is the Bitcoin dominance?

In finance, you can assess how crypto currencies are doing by comparing market capitalization between them. Bitcoin dominance is the value of all Bitcoins added together divided by the total value of all other crypto coins. Let's see why this is an important percentage.

In 2009, Bitcoin was the only crypto currency and Bitcoins dominance was obviously 100%. That changed with the launch of Ethereum in 2015 and especially when its price rocketed up in 2017. Since then, Bitcoin's dominance has hovered around 50% See chart below. At this writing (September 2022), Bitcoin makes up 40% of the total market value of the crypto market. 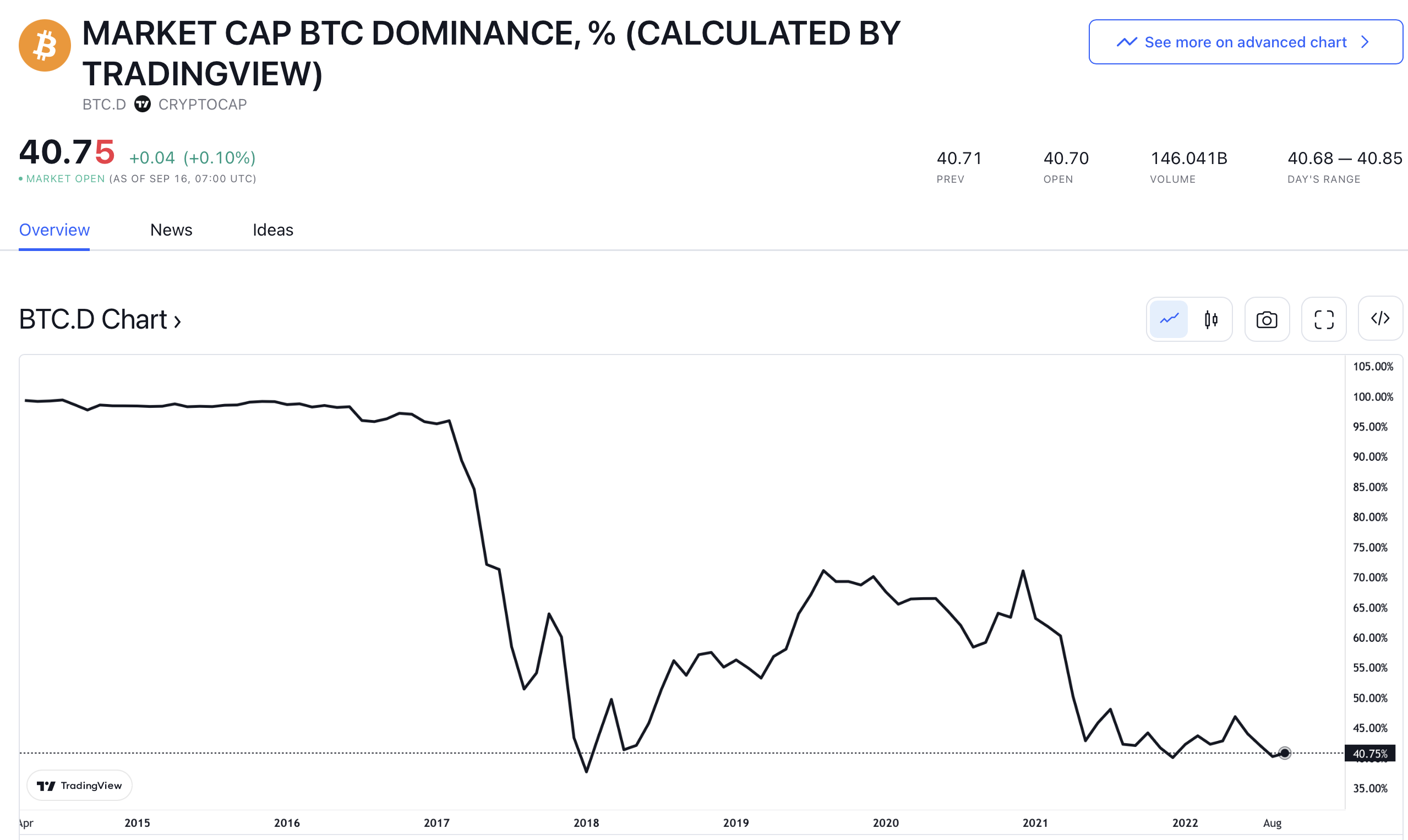 Of course, you can create a dominance graph of each crypto currency. If you were to make the chart for Ethereum, you would see that Ethereum dominance is now about 20%. This means that Bitcoin and Ethereum together make up over 60% of the total crypto market.

Why is Bitcoin dominance a useful metric?

Bitcoin dominance is a percentage. As such, it is a measure of Bitcoin's relative importance. Why is such a percentage useful to include?

In short, the percentage of dominance chart allows with to spot trends. It is a clear signal.

How do we interpret Bitcoin dominance?

Bitcoin dominance, of course, is a measure of how important the market considers Bitcoin relative to altcoins. This is more than a number: it has traditionally also been a measure of the state of the crypto market as a whole:

Side note
Immediately a side note to the above two rules of thumb. The share of stablecoins in the crypto market has grown rapidly since 2020: from less than 3% to a peak of 16% in June 2022. Because dollar stablecoins (such as USDC and USDT) are the preferred refuge of crypto investors, Bitcoin dominance rises less in times of uncertainty than it used to.

The term altcoin season or alt season is used for the period when altcoins outperform Bitcoin. A bull market often begins with Bitcoin's rise in price and dominance. What traders try to time is the moment when the dominance begins to decline. That is the beginning of alt season.

It is noteworthy that Bitcoin dominance has not rebounded (yet) in the bear market of 2022. Partly, as mentioned above, this has to do with the flight into stablecoins, a larger market today than in the past. Partly it may have to do - but this is far from certain - with Ethereum, which is increasingly stepping out of the shadow of big brother Bitcoin. For seven years now, Ethereum has proven itself to be a solid technology with a growing number of applications. It is being seen less and less as a high-risk investment - and thus could lose less dominance in bear markets. That keeps Bitcoin's rise in dominance in bear markets in check.

Since the birth of Bitcoin people have been worried about improving decryption technology one day becoming capable of breaking the encryption. A recent paper by Chinese researchers claiming a quantum computation breakthrough - which most consider a hoax - adds fuel to the fire. How likely a candidate is quantum computing to ever break Bitcoin's encryption?