How censorship-proof is crypto? The war has begun

After the sanctions two weeks ago against mixer Tornado Cash, the discussion has flared up in the crypto world about how censorship-resistant crypto is. Addresses that were hit could no longer trade on Aave, for example. If it is already so easy to put down DeFi, what does this mean for the future of crypto? How censorship-proof are Ethereum and Bitcoin anyway?

Tornado Cash is a kind of exchange machine where you put in crypto like ETH or USDC and get "clean" crypto out - that is, without transaction history. Two weeks ago, the U.S. government agency OFAC issued a sanction: anyone who still trades via Tornado Cash will be blacklisted and is therefore branded a criminal.

A sanction against a tool

It had never happened before: a sanction by a government against a tool - not against a person or government! It is like an authority in 1991 banning cell phones because criminals use them a lot. It remains to be seen whether the judge will agree to this sanction by OFAC. But the trial hasn't even begun yet.

Admittedly: Tornado Cash is used by criminals - estimates range from 7% to 30% of transaction volume. But still, it's largely normal users of crypto who use the service for privacy. Remember that your Bitcoin or Ether address is a "bank account" that is completely public. If you give someone your Bitcoin address for a payment, that person can see your complete transaction history. A service like Tornado Cash is a way to start over with a clean slate. Not necessarily a criminal use case but simply a way to preserve online privacy.

How censorship-resistant is DeFi?

The final word has not yet been said anyone who has their coins "laundered" by Tornado Cash. But until the judge delivers a verdict, the consequences are felt. Smart-asses immediately tried out how faithfully the sanctions would be enforced: they sent 0.1 ETH that had gone through Tornado Cash to Ethereum addresses of prominent ETH owners like Jimmy Kimmel and Justin Sun. And what did it turn out: indeed, they - and everyone else who has interacted with Tornado Cash since the sanction - can no longer access lending platforms like Aave. 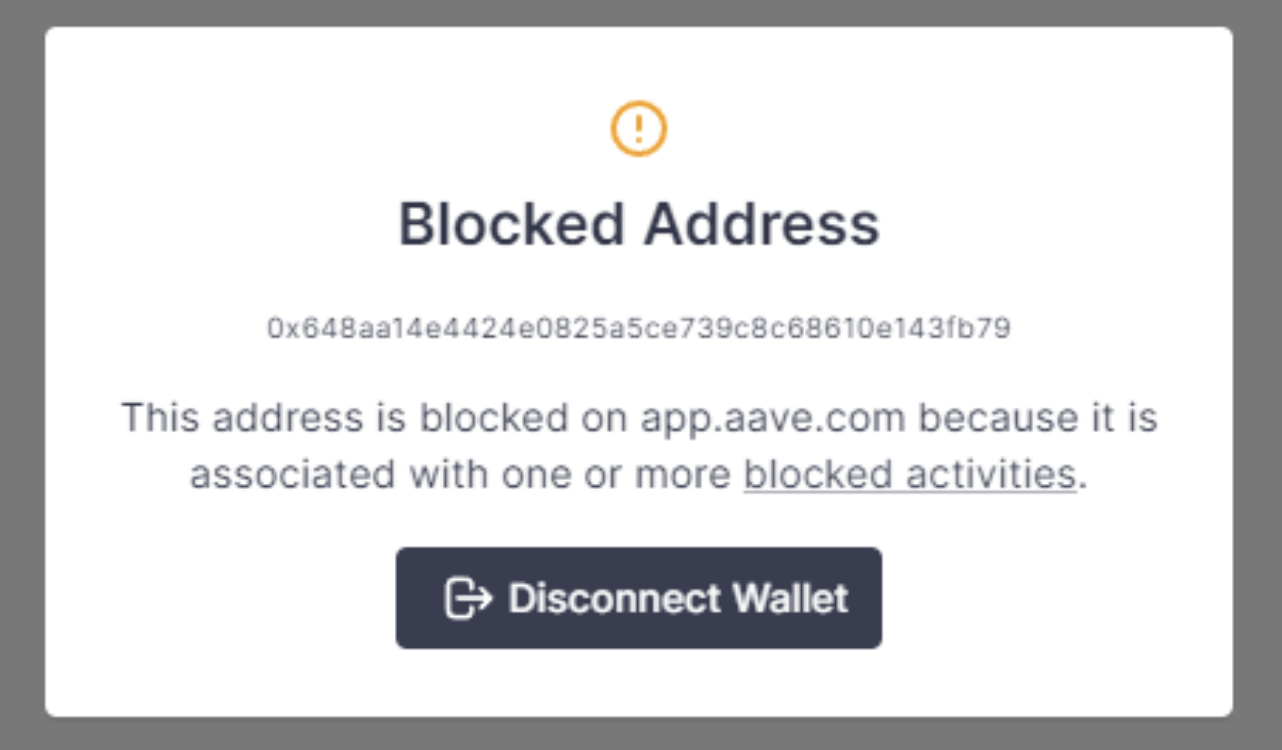 But wait: Aave is a form of Decentralized Finance, right? So a financial system that is not under the influence of governments? Quite disappointing. But no one wants to share the fate of the developer of Tornado Cash who was arrested in the Netherlands last week. Allegedly for money laundering, but in reality the crime may just have been writing programming code. And so everyone is obediently following the government decree.

The war has begun

Now that the first shot in the U.S. war on crypto privacy has been fired, we immediately know the following. When push comes to shove, it's companies and individuals who can be held directly accountable. And they comply. Circle, the issuer of USDC stablecoin, has also stopped recognizing (allowing to exchange for "real" dollars) USDCs that have been laundered in the Tornado Cash centrifuge.

We are increasingly understanding why Bitcoin's creator, Satoshi Nakamoto, has long been uninvolved and has always remained anonymous. That is not to say that Bitcoin is thereby resistant to similar sanctions - see below. And as Ethereum is heading toward the Merge, the debate is flaring up there too to what extent the state can exert pressure and enforce censorship. Let's hold both crypto dino's up to the light.

The Achilles' heel of Ethereum

The question that ultimately matters is whether it will remain/be possible in Ethereum to censor certain transactions from the mempool (the transaction queue), by decree of a government. This is up to the validators of each transaction block. If a majority of the validators are on the government's leash, then they will determine the fate of these transactions. Because validators with a different opinion will probably also refrain from including these transactions when it is their turn in the next block. After all, anyone who does not go along with the majority will be slashed (fined and thus lose Ether).

Incidentally, this is being worked on by Ethereum developers: there are techniques to confirm the validity of transactions without seeing the details of the transactions. So there is a way out of the moral dilemma.

Who calls the shots?

Back to the question of who decides what happens in Ethereum: the validators. For the most part, those are not people at home running a node: that happens mostly in staking pools. Are those staking pools on a leash? Well, it's crypto companies like Coinbase that stake on behalf of their Ethereum owners. Those companies are largely in the US. This is a risk of centralization and thus censorship (see graph below). 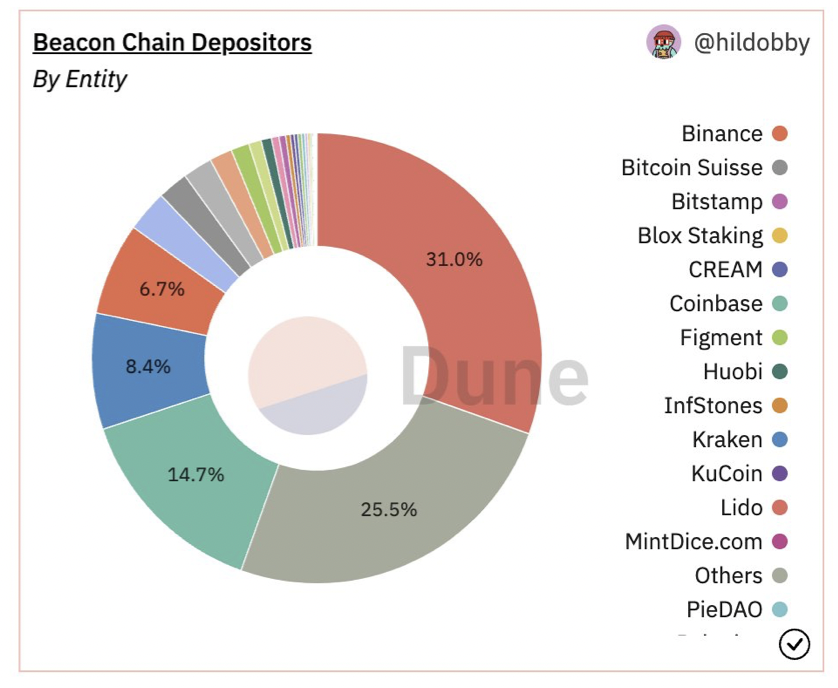 This raised the question on crypto Twitter: dear Coinbase, Kraken etcetera, what if you were asked by regulators to censor certain transactions - would you do it? Or would you stop continuing staking in protest? 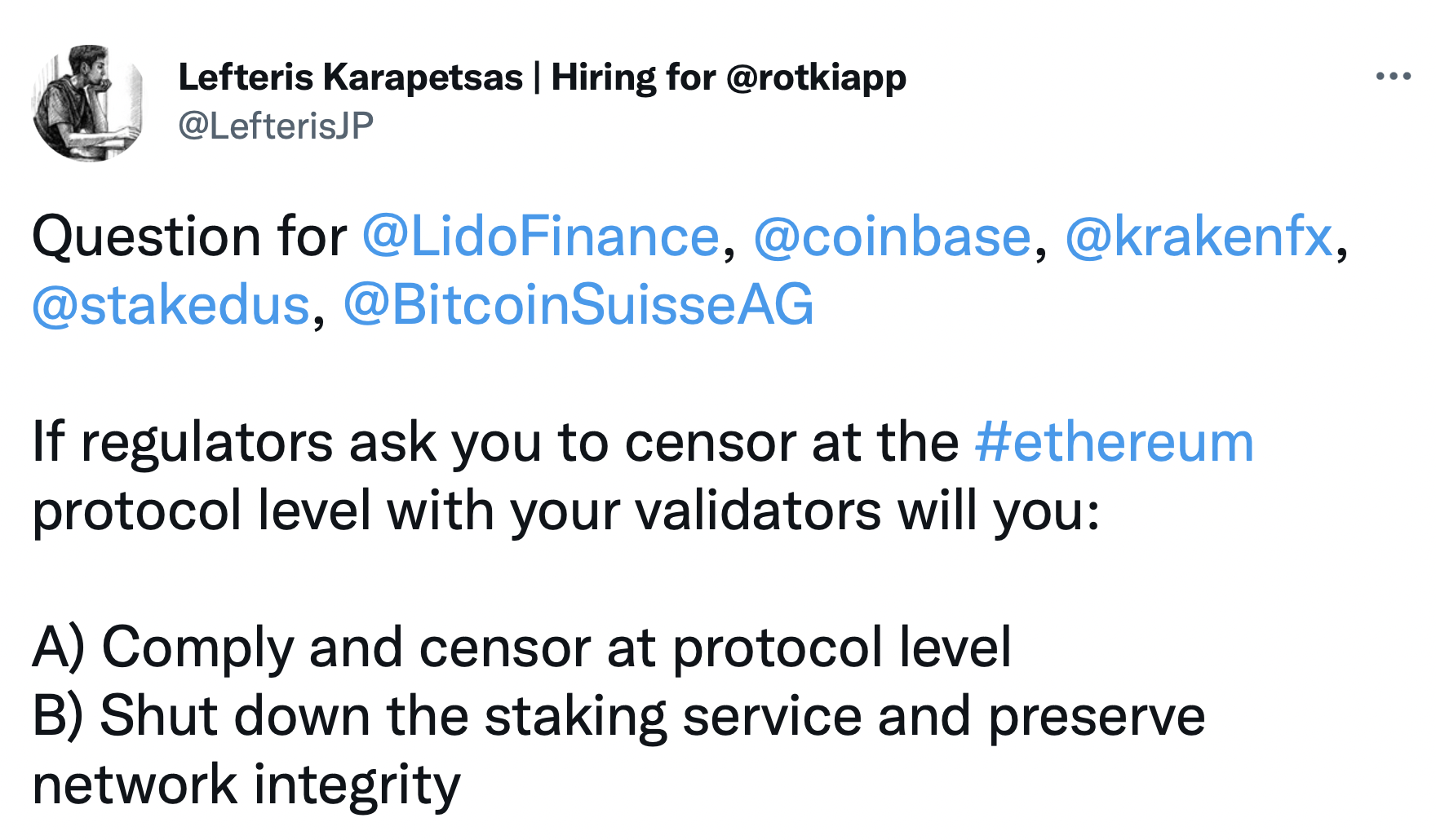 To that question founder of Ethereum Vitalik responded with: they will be punished: 'Burn their stake'.

Ha! That will teach them, those docile big companies. Or not... the Ether they lose is ultimately their customers', right...? A complicated issue.

The weakness of Bitcoin

Some Bitcoin maximalists watch with a bowl of popcorn as Ethereum and DeFi struggle with these questions. But they should realize that Bitcoin is not invulnerable either. Indeed, the role of miners in Bitcoin is not substantially different from that of validators in Ethereum.

Miners are usually large (publicly traded) companies. They are not idealistic volunteers but also just people who have to pay their company's energy bill and their own mortgage. A miner chooses which transactions to include in a block. He does so on the basis of the hight of the transaction costs that he can pocket as a bonus on top of the block reward. But it is also quite conceivable that a miner prefers not to include transactions from and to addresses that are blacklisted. Just to be on the safe side. And if the majority of miners were to do that - with or without pressure from above - it would lead to censorship. Not exactly according to the ideals of Bitcoin.

Even the most decentralized and therefore least seizable crypto protocol, Bitcoin, is theoretically susceptible to sanctions. That is not to say that Bitcoin and Ethereum could not make adjustments to escape these sanctions. After all, they are experts in cryptography (duh) and have all sorts of tools at hand to make transaction data invisible to validators and/or miners.

The overarching question is whether the sanctions pressure from Western governments is going to increase in the coming years and extend beyond just the "money launderers" like Tornado Cash. Tightening sanctions won't necessarily be the case: there are also likely scenarios imaginable in which a government benefits from a well-functioning crypto industry.

But if we would proceed on the road of tight sanctions, it is to be expected that part of the crypto ecosystem will fight its way out of this and go underground. Another part of crypto will be domesticated. The latter part will undoubtedly be the largest. After all, there are far more dogs in the world than wolves. But it is nice that they both exist.

There are two big sectors in the crypto industry that are not necessarily competing but complement each other. One is DeFi which is the abbreviation for decentralized finance, and the other is CeFi which stands for centralized finance. With both playing an essential role in crypto, we like to introduce you to CeFi with this article.

What is DeFi? Decentralized Finance explained

Decentralized Finance is one of the most important technological developments in the recent years. It became so popular that there is even competition between different blockchain technologies and each one is trying to capture as much market share as possible. The most promising platforms so far are Ethereum, Binance Smart Chain, Cardano and Solana. Of course, there are even more blockchain technologies out there trying to built their own ecosystem, but in this article, we are going to focus on the most successful cryptocurrencies in this particular field and like to answer the question what DeFi really is.

Maximal Extractable Value (MEV) is the (potential) profits for miners or validators producing blocks on a blockchain. They do this by picking and re-ordering transactions within blocks. You can view MEV as a tax on users of the blockchain.