Almost 400 tons were scooped up by central banks in the third quarter, more than quadruple the amount of the same quarter in 2021. As not all official institutions publicly report their gold holdings (China and Russia don't, for example), the World Gold Council has stated that it doesn't rule out further unreported buying. Turkey and Qatar were among recent buyers who disclosed their buy orders. 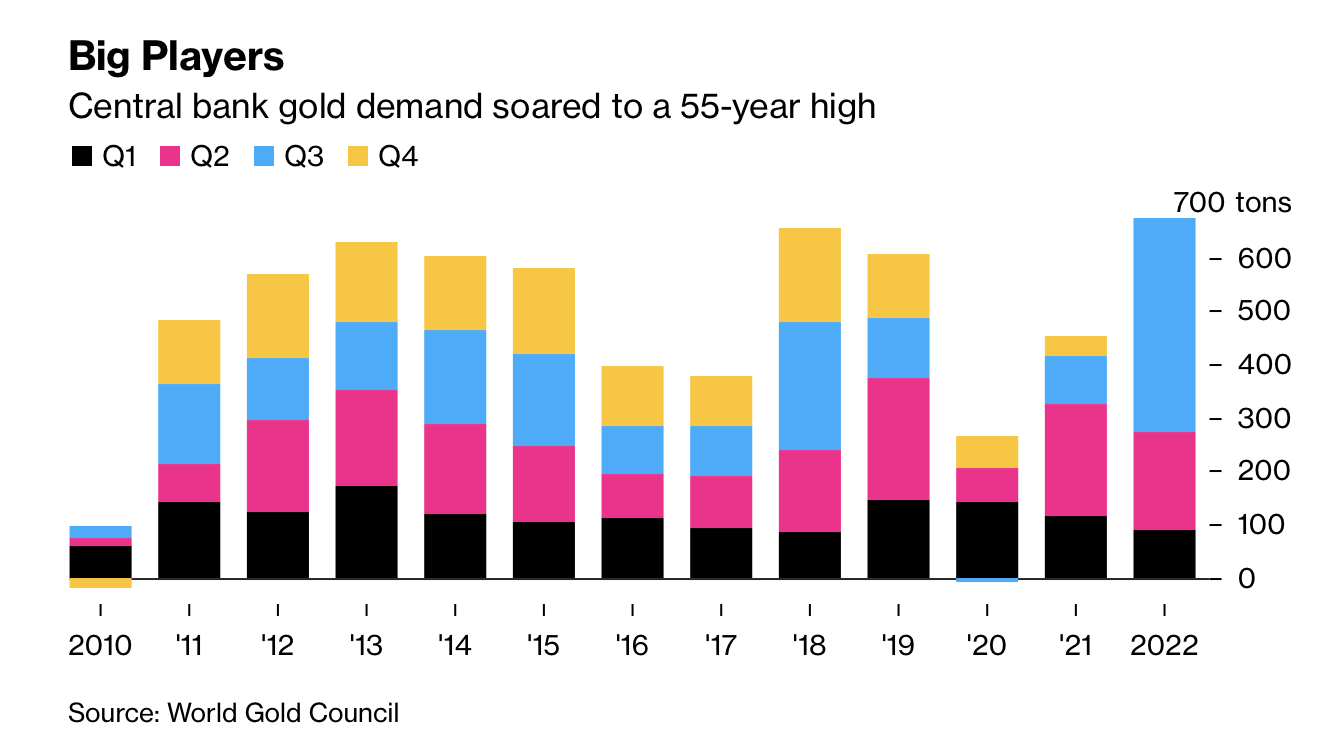 Global central banks own about one-fifth of all the gold ever mined. They acquired the vast majority in the last decade, in which they became net buyers of the metal. This hasn't always been the case. Around the turn of the millennium, there was a gold bear market. Many banks sold. Notoriously, the Bank of England sold most of its gold, a move that the bank is probably regretting now, as the price has risen 500% since.

Why do people buy a shiny rock?

Both central banks and consumers - especially consumers in countries like China and India - buy gold to protect their purchasing power from an inflating currency. The increase of gold through mining is roughly 1.5% per year, which is a much lower inflation rate than the rate at which dollars and euros are created, which is closer to 8% per year.

Have a look at this graph: the real estate to gold ratio: it measures the amount of gold it takes to buy a family house in the US. This fluctuates wildly throughout the years, but is currently roughly the same as a century ago: 330 ounces or 9 kg per house. In other words: if your great-grandfather had passed on his savings in gold, you would still be able to buy the same house with it. Had he saved in his local currency, you wouldn't even be able to buy the front porch with it.

The age of dollar reserves ending?

For years, banks were less interested in gold and keener on stuffing their vaults with dollars and US treasuries. But why would any country keep their reserves in the currency of another nation? Well, the dollar has been the world reserve currency since the end of the second world war. Until 1971, it was in fact backed by gold: banks across the world could and did in fact exchange their dollars for gold. When the money printing in the U.S. got out of hand, the country had to leave the gold standard.

So, what has kept the dollar valuable after the gold standard collapsed? In essence, it has been oil. Since the 1970s, the average price of oil has been roughly 70 dollars per barrel- with fluctuations of course. This meant that countries with dollar reserves had more or less the guarantee that they could always exchange their dollars for oil - the foundation of their economies.

Why the renewed interest in gold?

Since roughly 2014, the trend of central banks stacking dollars has reversed. When Russia invaded Ukraine in 2022, the US froze Russian central bank dollar accounts. This was unprecedented. It signaled to all countries: these dollars are not really ours! Even though we can't be sure, this development might have led to the recent buying spree of gold.

It makes sense that in the deglobalizing world we are in, countries want to be less dependent on the United States. Gold is a great universal store of value to rely on. As crypto people, we are of course curious if in the coming years a central bank will announce that it has purchased Bitcoin. Some have pointed to Japan as the most likely Western country to take the plunge. This is of course highly speculative.

Gold might be a shiny rock, a 'boomer coin', but make no mistake. It has been hard money for thousands of years. There is no reason that it will stop being so any time soon.

What is a short squeeze?

Shorting a stock or crypto is trying to profit from a drop in the price. You borrow the shares and sell them immediately, hoping for further price declines. If the reverse happens, you find yourself forced to buy back at a higher price. If a large proportion of traders hare forced to do that, it leads to a fierce price rise: the short squeeze.