Currently, about 70% of blocks on the Ethereum blockchain are guaranteed to include NO transactions from addresses that are sanctioned by the OFAC (Office of Foreign Assets Control). This means that a transaction from a 'naughty' address can still be included by other block builders than Flashbots. But they will, on average, have to wait one or two extra blocks (Ethereum block time is 12 seconds). So, no real censorship. 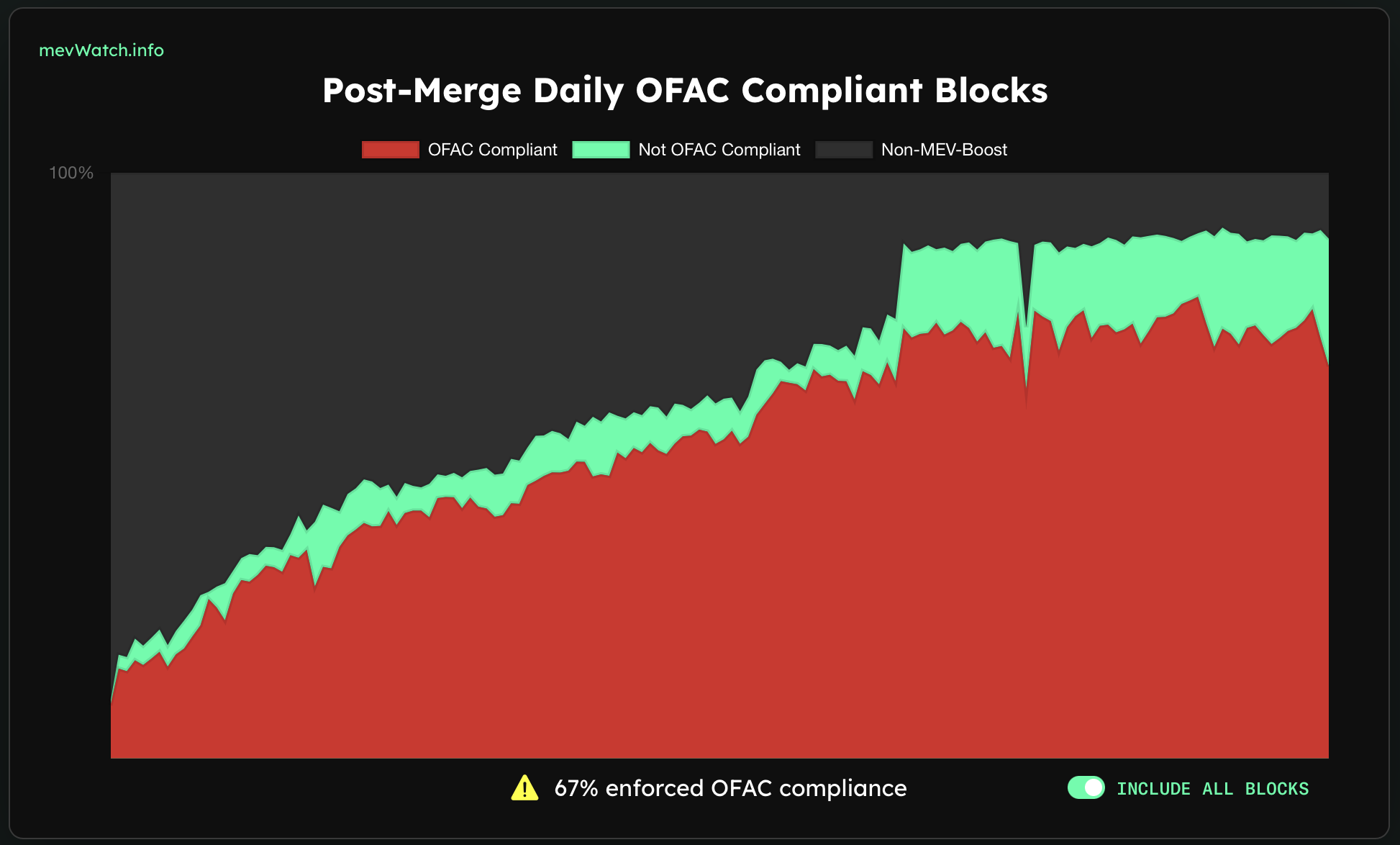 Still, it rightly worries the Ethereum community that it's so vulnerable to state-level interference. That's why Flashbots has introduced a proposal that would limits its own popularity. Let's dive in.

How did the Ethereum censorship risk arise?

The censorship problem on blockchains paradoxically results from the public nature of the mempool. The mempool is the place where candidate transactions are waiting in public, hoping to be included in a block. Traders or trading bots who can read and interpret this mempool can financially benefit from their knowledge by trading around other people's transactions. Without going into detail, view it as a form of insider trading. The money that clever players make by exploiting the mempool, is called Maximal Extractable Value (MEV).

As DeFi started maturing in 2020, MEV turned into a multi-million-dollar industry. Some smart traders (had their bots) make tons of money, essentially by taxing ordinary Ethereum users. To curb this increasing tax and increasing congestion on the Ethereum chain, an organization called Flashbots came to the rescue. Its idea was to shield the mempool and to outsource the production of candidate blocks to specialized players. Only these would have insight and would compete in a free market for block production. The candidate blocks would be auctioned off to validators (there are a few steps in between that we won't go into here: relays and MEV-Boost). The only thing a validator can see, is the monetary (MEV) bonus attached to the block, not the transactions in it. A validator would then place its bids.

New problems
With the Flashbots solution Ethereum users got transaction privacy on the one hand and a fair chance to benefit from MEV themselves, by recruiting Flashbots. There were trade-offs however... The point of Flashbots was that MEV would become a free market. But, for a free market, there are currently too few players and too many corresponding 'black boxes'. For example, the builders. Flashbots admits: 'Builders have full view of incoming transactions, which gives them the power to frontrun, censor, etc.'

Now Flashbots has come with a proposal to curb their near monopoly and censorship powers. It wants to tackle the censorship threat by setting a minimum bid above which validators should use Flashbots. Only the blocks where big MEV profits can be made would be outsourced to Flashbots. The blocks with a small profit, that is, below the minimum bid, would then be built outside Flashbots and thus without being affected by OFAC censorship.

Why would validators accept this, as it would reduce their MEV income? Well, it turns out that a large percentage of blocks only offer a small MEV bonus. Not worth the while of outsourcing it to Flashbots. Here's a distribution: 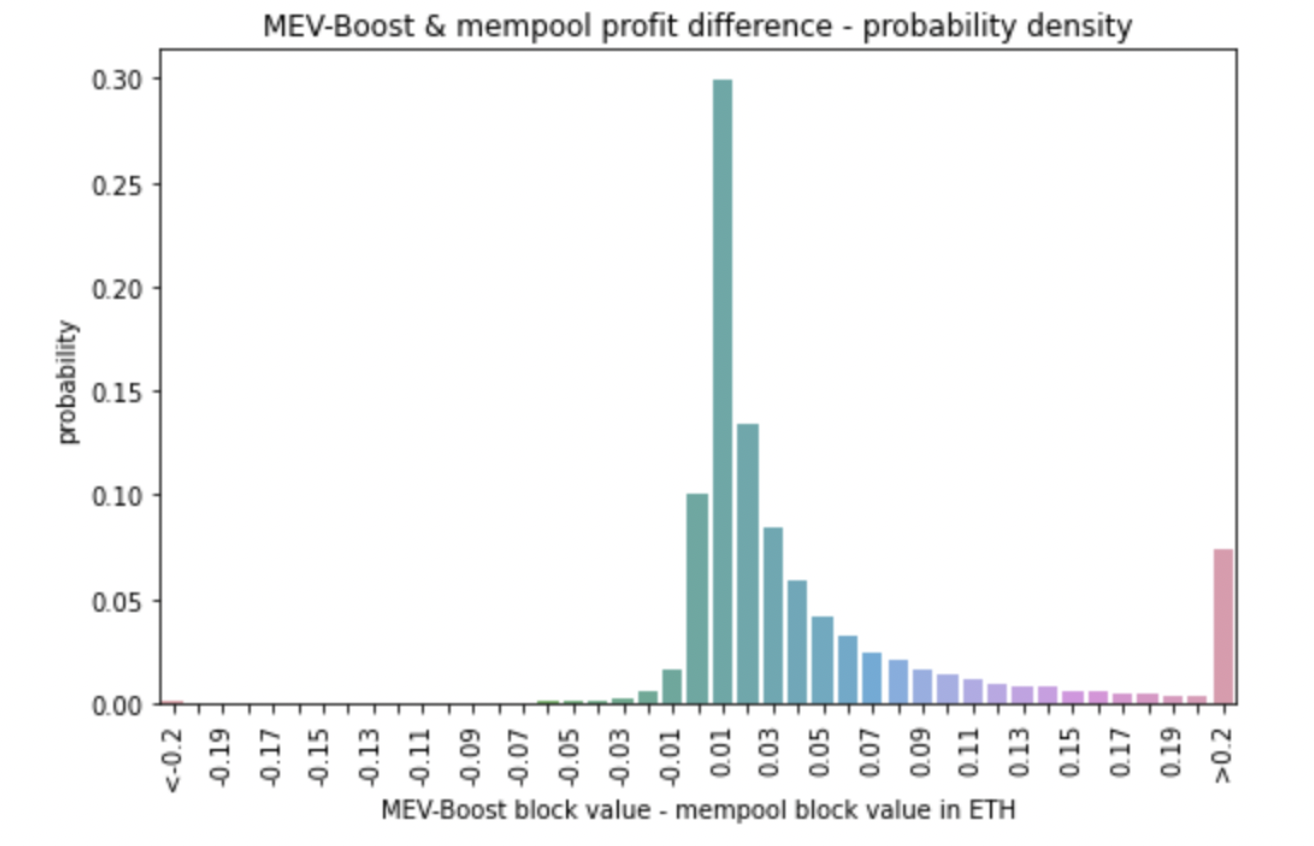 As can be seen, the vast majority of blocks return a modest MEV bonus of between - 0.01 ETH. And +0.05 ETH. On the other end of the curve, is a roughly 10% of the amount of blocks that return more than 0.2 ETH. Those are the blocks worth bidding for: those are the ones you, the validator, would want a specialized player like Flashbots to assemble for you.

Flashbots now proposes the solution of setting a minimum bid of for example 0.05 ETH per block. Validators would pay a small price by not having all blocks built by Flashbots. That would be their investment in a censorship-resistant Ethereum.

The proposal by Flashbots sounds good but it's not certain yet if validators will go along with it. Will it be a concept that will work in a highly competitive environment? Time will tell.

The broader point is that Ethereum has these MEV issues while Bitcoin doesn't. That's because Ethereum allows for complex, conditional trades that can be frontrun and traded around. Complexity leads to specialization, which either leads to a Wild West-like realm (the old situation) or centralization and potential censorship (the current situation).

Fortunately, Ethereum is actively working on mitigating these risks.

What is impermanent loss?

Impermanent loss means something like unrealized loss. It is the risk caused by price fluctuations between two coins in a liquidity pool on a decentralized exchange. The unrealized loss becomes realized the moment you withdraw your capital from the pool.

There are two big sectors in the crypto industry that are not necessarily competing but complement each other. One is DeFi which is the abbreviation for decentralized finance, and the other is CeFi which stands for centralized finance. With both playing an essential role in crypto, we like to introduce you to CeFi with this article.

A mining rig is the assembled hardware you need to mine crypto. Bitcoin is the best-known example of a coin that comes into circulation through mining. Doge and Litecoin are also well-known coins in this list.