The Bitcoin network has overtaken PayPal in terms of the total amount of money circulating. Mastercard is the next prey, which could happen as early as 2024, predicts Blockdata, a market intelligence platform. On average, in 2021, the Bitcoin network processed $489 billion worth of transactions per quarter. PayPal processed an average of $302 billion per quarter.

Are the two payment networks even comparable, though? Bitcoin (BTC) is more than a payment rail: many people use it as a savings tool and don't move their Bitcoin for months or years. So, in that light, it is notable that it has overtaken PayPal in terms of monetary volume. On the other hand, not all transactions on the Bitcoin network are strictly payments. Suppose you move Bitcoin from one wallet to another wallet you own. This move is counted as a transaction in these figures, even though it is not an actual payment.

Looking at the value of the average transaction, we see a vast quantitative difference. The average Bitcoin transaction now has a value of about 20 thousand dollars. An average PayPal transaction is about 70 dollars. Because the Bitcoin network has a limited capacity in terms of the number of transactions - an order of magnitude smaller than Paypal - the average transaction amount is only expected to increase with Bitcoin’s increasing popularity. Transactions for smaller amounts are expected to increasingly go over the so-called Lightning network. There the costs and processing times are much lower than on the base layer of the Bitcoin network.

In short, comparing Bitcoin with a conventional payment processing operator is a bit apples to oranges. But it is still interesting that Bitcoin has overtaken PayPal, which is about twice as old (PayPal was founded in 1998). PayPal employs over 25 thousand people. Bitcoin has no one on its payroll.

Mastercard and Visa are next on the list. Bitcoin users will have to roll up their sleeves. Mastercard currently processes more than three times the value of Bitcoin. Visa more than five times as much. But things are evolving fast. As you can see in Blockdata's graph, the monetary volume of Bitcoin transactions in 2021 is already a multiple of its volume in 2020. 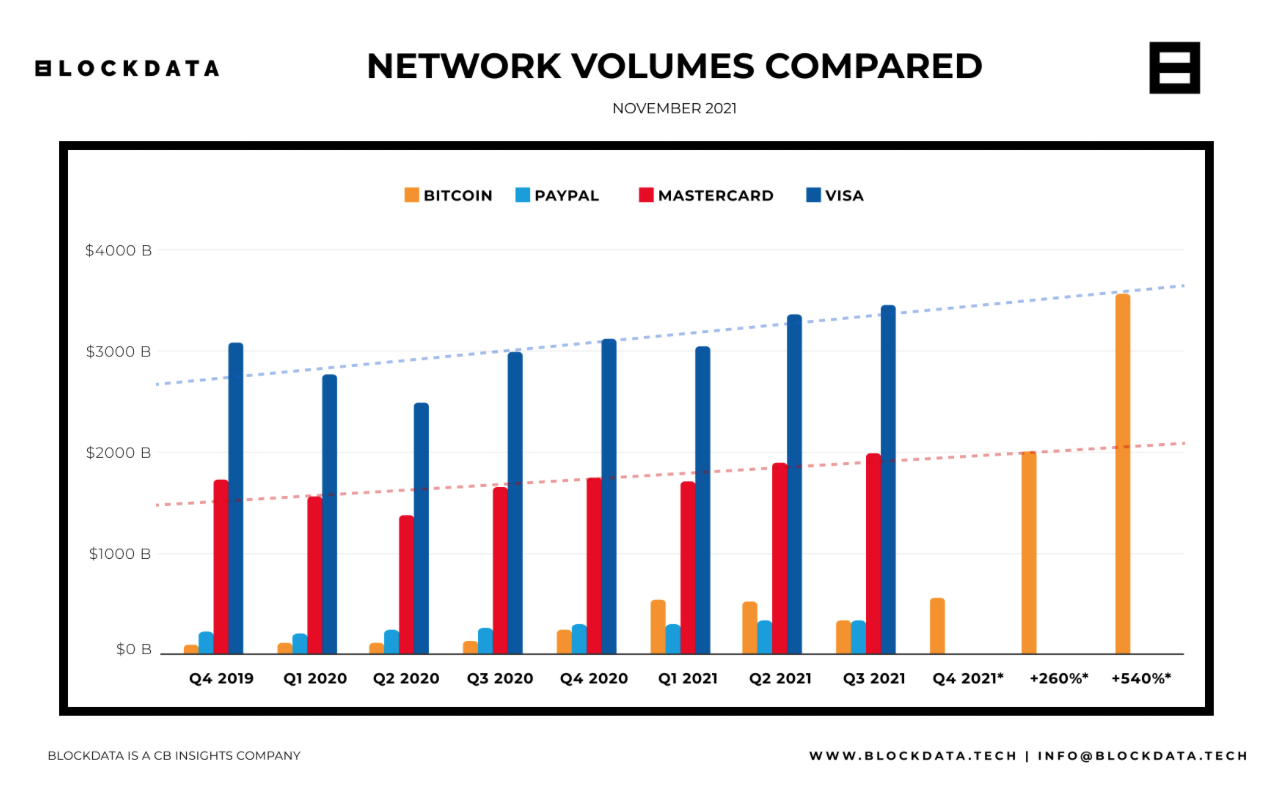 Another dip: what's going on?

It was another roller coaster ride, the crypto market. Or should we say: a slide? Over the past day, Bitcoin dropped more than 8% to just above $38,000. Ethereum and other altcoins fell by a similar or greater percentage. What's going on? We list a few causes and reflect on how to put this in perspective.

Fidelity: crypto is here to stay

In a report, Fidelity looks back at the year 2021 for Bitcoin and crypto in general. What expectations do they have, based on the developments that are important in their view? Fidelity is one of the largest asset managers in the world, with over four trillion dollars under management. One of the main conclusions: the fact that the Bitcoin network has recovered so quickly from China's ban is very encouraging. A second conclusion: stablecoins and defi are slowly coming of age.