What is Bitcoin halving?

This May it is time for the next bitcoin halving! What exactly does this mean? This simply means that the reward for the miners will be halved per block. At the moment, the reward per block is at 12.5 BTC, but this is going to 6.25 BTC. The exact date on which the Bitcoin halving is scheduled is currently May 13, 2020, but this date is constantly changing as it depends on the network itself.

This Bitcoin halving takes place approximately every 4 years, more specifically, the halving takes place after 210,000 blocks have been created. This was created by Bitcoin creator Satoshi Nakamoto to ensure Bitcoin inflation is transparent as you can see below. The biggest impact on the market will be explained below. 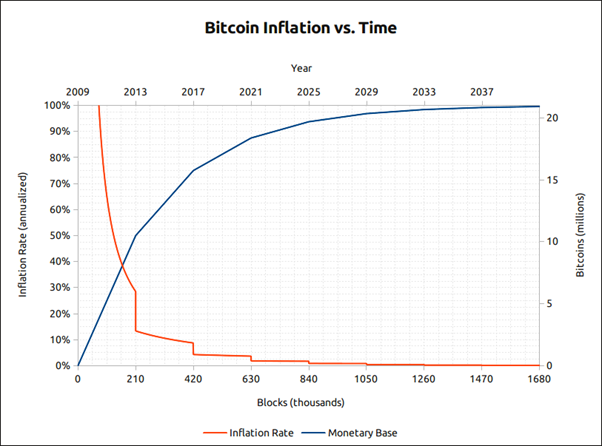 But why is there so much interest in it? Since the number of Bitcoins that can be mined per day gets cut in half with the Bitcoin halving, the supply in Bitcoins is reduced and the distribution between supply and demand for Bitcoin shifts considerably. There are multiple consequences for this, including the rise of the Bitcoin price.

It caused the price of Bitcoin to rise sharply in the previous halves in 2012 and 2016. And because the current economy is in a major dip due to the corona crisis, there is a possibility that the increase in price could be even higher than in the previous two halves in 2012 and 2016. This is of course speculation, but that will of course bring the question, is this the right time to buy bitcoins?

Bitcoin fees – How do they work, and why do you have to pay?

What is a hard fork?

Block reward: One of Bitcoin’s most ingenious features